Between 1950 and 2000, wind damage accounted for more than half of all natural disturbances causing damage to European forests (Schelhaas et al. 2003). The amount of damage caused might increase due to increasing large-scale windstorm intensity, which has been observed over the last three decades, likely driven by climate change (Gregow et al. 2017). To mitigate the negative impacts of wind disturbance, forest ecosystem resilience should be increased by implementing sustainable forest management practices (Suvanto et al. 2016).

The probability of wind damage has regional differences, shaped by complex interactions between multiple factors e.g., wind climate, soil type, topography and silviculture practices (Albrecht et al. 2010; Lagergren et al. 2012; Díaz-Yáñez et al. 2017). Studies investigating such effects have been conducted in Fennoscandia (Valinger and Fridman 2011; Zubizarreta-Gerendiain et al. 2012) and Germany (Albrecht et al. 2010); in Baltic region such information is lacking. In Latvia, annual wind disturbance is the reason for 40 to 60% of all sanitary clearcuts, according to Latvian State Forest Service statistics (LSFS 2018). Therefore, the aim of this study was to identify significant effects of stand properties on windstorm damage occurrence.

Latvia is located in the hemiboreal vegetation zone, which is characterized by a mixture of pure and mixed stands of deciduous and conifer tree species (Ahti et al. 1968). According to the National Forest Inventory, the dominant tree species are birch (Betula spp.), Scots pine (Pinus sylvestris L.) and Norway spruce (Picea abies (L.) Karst.), which occupy 28.2%, 26.9% and 18.3% of the total forest area, respectively (NFI 2017). The climatic conditions in Latvia are strongly influenced by the Baltic Sea, intensity of prevailing westerlies and large-scale weather systems, e.g., North Atlantic Oscillation (NAO) (Jaagus et al. 2010, 2014). NAO activity have been linked to winter storm frequency and intensity (Gregow et al. 2017).

In January 2005, the winter cyclonic windstorm Erwin (Gudrun) severely affected the territory of Latvia. It was the third severest windstorm since the 1960s, with maximal average wind speed of 29 m s–1 and with gusts of up to 40 m s–1, according to the Latvian Environment, Geology and Meteorology Centre (LEGMC 2013). Approximately 11.1–15.6 million m3 of wood were damaged (Donis et al. 2007).

In total, 169 study plots of 1×1 km2 (Fig. 1) were randomly scattered over the territory of Latvia (1–75, with the mean of 35 stands per plot). All forest stands within each plot were assessed by local LSFS foresters. Stand properties (tree species composition, mean height, relative stand density, mean stem diameter, soil type, timing of thinning) were obtained from an inventory, conducted prior the windstorm (Table 1). After the windstorm, damage (lost proportion of standing stock) and forest edge information was evaluated for each stand. Fieldwork was done in summer 2005. In total 5959 stands dominated by pine, spruce and birch with mean height > 10 m were inventoried. 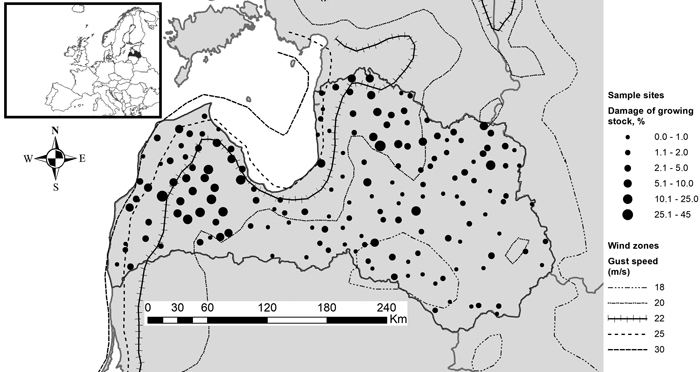 Fig. 1. Distribution of the study plots in the territory of Latvia. View larger in new window/tab.

Multicollinearity between explanatory variables were assessed using Generalized Variance Inflation Factor (GVIF), variables with GVIF > 5 were excluded from the model, in our case – mean stem diameter.

For description of the model performance marginal and conditional pseudo-R2 values were calculated using lognormal method. The selection of the best model was based on AIC (McGullagh and Nelder 1989).

The Model_2 was chosen as the final model, based on lower AIC values, with conditional and marginal pseudo-R2 values of 0.70 and 0.14, respectively. The final model had eleven statistically significant variables (shown in Table 2).

This work summarizes the significant effects of stand properties on damaged standing volume, based on data collected throughout territory of Latvia after the windstorm of 2005. Our study results were in alignment with earlier studies carried out in southern Sweden (Valinger and Fridman 2011) and south-western Germany (Albrecht et al. 2010), where similarly spruce admixture, increasing mean stand height, fresh forest edges and recent thinnings increased stand susceptibility to windstorm damage.

Increasing windstorm damage with decreasing relative stand density is difficult to explain, as relative density did not correlate with timing of thinning, suggesting that vulnerability to wind damage might be related to historical forest stand management.

In our study, tree species composition was not statistically significant in the model. Although pure Norway spruce stands are considered the most vulnerable to windstorm damage (Valinger and Fridman 2011), also mixed stands are often damaged by wind and snow, and in some cases, even more than monodominant stands (Díaz-Yáñez et al. 2017).

Higher damages in stands on peat soils mostly likely is linked to shallow rooting, which affects tree stability (Nicoll and Ray 1996). Similar results have been obtained in Finland, where stands on peat soils had severe windstorm caused damages (Zubizarreta-Gerendiain et al. 2012). In 2005 windstorm, soils were unfrozen, under these conditions trees commonly are uprooted and birch has weaker resistance to uprooting than pine (Peltola et al. 2000), which might be the reason of larger damages in birch and in pine stands in wind zone (25–30 m s–1).

Our results suggest that the vulnerability to windstorm damage could be addressed through silvicultural treatments. Wind resistance of individual trees could be improved by decreasing initial stand density (Gardiner and Quine 2000). In this way, the number of thinnings could be reduced. Lower initial stand density could benefit growth of a radial increment (Gardiner and Quine 2000), which might reduce the rotation period as target diameter could be reached faster, therefore minimizing the probability of windstorm damage. However, many uncertainties are linked to climate change and its various impacts on regional wind climate and forest growth (Blennow et al. 2010). General conclusions based on single storm events must be treated with caution (Albrecht et al. 2010; Valinger and Fridman 2011). Therefore, further studies could combine and analyse data of several windstorm events, to assess forest stand susceptibility to windstorm damages on broader perspective.

We thank Didzis Elferts and Roberts Matisons for assistance with statistical analysis. We are very grateful to the two anonymous reviewers, for their suggestions and comments which helped us to improve the manuscript.

This work was supported by the European Regional Development Fund project Development of decision support tool for prognosis of storm damages in forest stands on peat soils (No 1.1.1.1/16/A/260).