Long-term (47 years) effect of experimental whole tree harvesting (WTH) with a heavy soil scarification on ground cover vegetation was assessed in a dry nutrient-poor Scots pine (Pinus sylvestris L.) stand in Latvia. Neighbouring conventionally managed young (10 years) and mature (119 years) stands of the same type were used for comparison. Higher species richness was observed in the WTH stand compared to conventionally managed young and mature stands (24, 18 and 16 species, respectively), likely due to the profound disturbance. The Shannon diversity index was higher in the young than in the WTH and mature stands (2.36, 1.77 and 1.63, respectively); still, the composition and structure of ground cover vegetation in WTH was more similar to the mature stand. Nevertheless, the occurrence of oligotrophic species in the WTH stand suggested decreased soil nutrient content and potential development of different plant community. Hence, such method might be considered for restoration of oligotrophic stands. Nevertheless, the period of 47 years appeared sufficient for the ground cover vegetation to recover after the WTH.

In the boreal and hemiboreal coniferous forests, existence of the oligotrophic stands with specific ground cover species, which are important component of biodiversity, depends on low moisture and soil fertility (Nordin et al. 2005). After conventional harvesting (i.e. clearcut), soil nutrient level is often temporarily increased by the mineralization of harvesting residuals (Smolander et al. 2008) which, in combination with eutrophication and altered light and moisture conditions, favour development of the herbaceous vegetation (Hannerz and Hånell 1997). Under such conditions, the abundance of the oligotrophic ground cover species e.g. lichens and mosses might be affected for a longer period (Nordin et al. 2005).

With growing demand for bioenergy (Parikka 2004), the whole tree harvesting (WTH) management, when most of wood is removed, has been tested for biomass production (Nisbet et al. 1997; Wall 2012). Although the amount of harvested biomass is increased, WTH management can result in minimal to significant reduction of soil nutrients, hence to a different extent affect productivity of a stand (Wamsley and Godbold 2009; Wall 2012) and ground cover vegetation (Olsson and Staaf 1995). In this regard, in nutrient-poor sites, WTH might be used to maintain the typical ground cover species by minimizing eutrophication (Nordin et al. 2005). In Sweden, Olsson and Staaf (1995) observed that during two decades after WTH, vascular plant cover was replaced by mosses and, in the dry sites, rapid recovery of lichens and heather (Calluna vulgaris) occurred. Still, there is insufficient information about the effects of WTH in a longer term.

The study area was located in the central part of Latvia (56°45´N, 24°35´E). According to the data from national meteorological service, the mean monthly temperature ranged from –3.9 to +17.7 °C in January and July, respectively. The mean annual precipitation was ca. 650 mm; the highest monthly precipitation (ca. 75 mm) occurred during summers. The study area was covered by dry nutrient-poor Scots pine stands on acidic sandy soil (Vacciniosa type). At the study site, after a clear-cut in 1968, all aboveground and stump biomass together with the upper soil layer (ca. 8 cm thick) were pushed away with a bulldozer and reforested, imitating an extreme WTH event. As a result, one patch with heavily scarified soil and minimum residual woody biomass e.g. small roots (WTH stand, ca. 0.8 ha) and another patch, where the upper soil layer and wood residuals were moved to (eutrophicated zone, ca. 0.4 ha), were formed. Additionally, the neighbouring conventionally (i.e. with clearcuts) managed stands, at the age of 11 (young stand, 3.1 ha) and 119 years (mature stand, two thinnings, 3.5 ha) were sampled for comparison.

In total, seven 50 m long transects, two per stand (one in the eutrophicated zone), were established. To avoid edge effects, the transects were placed at ≥ 10 m distance from the patch edges. On each transect, 17 sampling plots with size of 1 × 1 m, were regularly placed with 2 m spacing. In each plot, the relative projected cover of the ground cover species, tree seedlings and bare soil (including wood residuals and debris) was arbitrarily determined. Additionally, species with lower abundance, which did not occur in the sampling plots, but were present within 1 m distance from the sampling plot, were recorded with relative cover of 0.2%.

For each stand/zone, mean relative cover of the ground cover species, tree saplings and bare soil was calculated from the sampling plot data. Species diversity for each stand was described by the Shannon (H′) and Simpson’s (D) indices (Krebs 2014). The relative cover of species and bare soil between the stands was compared by the t-test. The ground cover vegetation communities were assessed by the Detrended Correspondence Analysis (DCA), a multivariate orthogonal ordination method (Hill and Gauch 1980). The statistical significance of the ordination axes was determined by randomization test (performing 10000 randomizations). The p-values were calculated as the probability of higher Eigen values (before detrending) for randomized than for the original datasets. The analysis of similarities (ANOSIM), a non-parametric ANOVA-like test based on the ranked dissimilarity matrix (Clarke 1993), was used for the statistical comparison of species composition between the stands. The analyses were conducted in program R, using packages “vegan” (Oksanen et al. 2013).

The first two DCA ordination axis were significant (p-values <0.01) and showed that vegetation of sampling plots formed continuous gradients; still, four groups were clearly distinguished according to the stands (Fig. 1). The overlap between the groups, however, demonstrated the presence of patches with similar ground cover vegetation within the studied areas. The gradient captured by the first axis might be related to stand age, as suggested by the scores of sampling plots (stands) and early successional species (Table 1). The second axis might be related to the fertility of the top soil, as hinted by the scores of Vaccinium myrtillus and Arctostaphylos uva-ursi. The statistical comparison of the ground cover vegetation showed significant (p-value <0.001) differences amongst all stands (Table 3). The strongest dissimilarities (highest R-value) were observed between the young and mature stands, while the weakest – between the mature stand and the eutrophicated zone (R = 0.80 and 0.36, respectively). Ground cover vegetation of the WTH stand showed intermediate R-values when compared to other stands; nevertheless, it was more similar to the mature stand (R = 0.40). 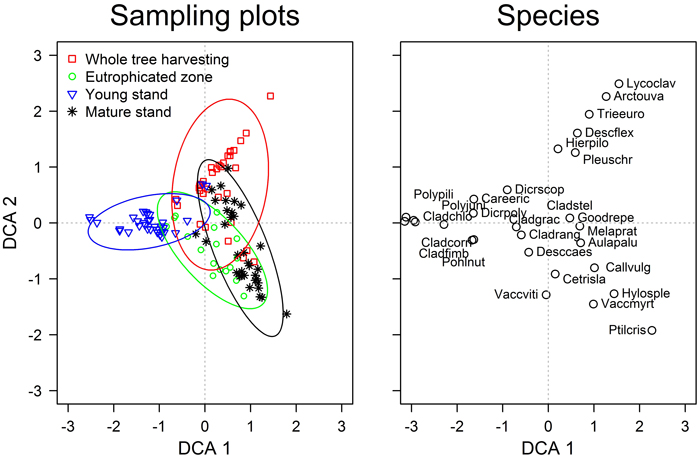 Fig. 1. The detrended correspondence analysis ordination of the ground cover vegetation in the studied experimental and neighbouring stands of Scots pine. Species abbreviations are explained in Table 1. The ellipses show the standard deviations of the ordination scores of each group (directions of the principal axes are defined by weighted correlations).

As hypothesised, WTH had a significant effect on ground cover vegetation in long-term as species richness was increased (Table 1) and the composition altered (Table 3). Yet the diversity indices were decreased (Table 2) due to the clear dominance of Pleurozium schreberi (Table 1), which favours disturbance and rapidly colonises bare soil (Kavanagh 1987; Frego 1996). Higher species richness in the WTH stand (Table 1) might be explained by soil disturbance (Luzuriaga et al. 2005). The removal of top soil layer with harvesting residuals, apparently, provided the opportunity for a higher number of species to establish, likely via improved germination conditions (Stevens and Hornung 1990) and release from competition with the preceding vegetation (Hart and Chen 2006). Similarly, relatively high species richness was observed in the young stand, which had been recently disturbed (harvested) (Table 1). The presence of bare soil patches (Table 1) in the WTH stand, which could be related to decreased top-soil fertility due to nutrient drift after the removal of ground cover (Smolander et al. 2008; Finér et al. 2005), suggested decreased competition also in a longer term. Nevertheless, due to this, the area also might be more vulnerable to invasive species (Peltzer et al. 2000). Additionally, in the WTH territory, two nationally red listed species – Lycopodium clavatum and L. annotinum L., were found (Table 1), suggesting that the disturbance has favoured their regeneration, though a negative effect of WTH on slowly developing stress-tolerant plants have been reported in a shorter term (Olsson and Staaf 1995).

Although the floristic composition of ground cover vegetation (Table 1) was typical for dry nutrient-poor boreal stands (Engelmark and Hytteborn 1999), the significant differences between the stands (Table 3) indicated diverse plant communities (Hart and Chen 2006). Still, the overlapping DCA scores of the sampling plots (Fig. 1) implied that these differences were gradual. The gradient according to the first ordination axis (Fig. 1) was related to stand age, hence, apparently, represented the successional changes of vegetation (Hart and Chen 2006). This was supported by the abundances of Cladonia spp. and Hylocomium splendens, which interchange with ageing (Kavanagh 1987), as well as by the highest dissimilarity between the young and mature stands (Table 3). Regarding stand age, the WTH stand was more similar to the mature than young stand (Table 3), suggesting better conditions for the late successional species.

The fertility gradient related to the second axis of the DCA distinguished most of the WTH sampling plots from others (Fig. 1) suggesting development of distinct oligotrophic plant community with Arctostaphylos uva-ursi and Lycopodium spp. The observed overlap with other stands and longer gradient of WTH stand might be explained by microsite conditions, hence with higher amount of nutrients locally remaining after harvesting, thus suggesting formation of patches with diverse vegetation. The clear overlap of the eutrophicated zone and the mature stand according to this gradient might be explained by the accumulation of nutrients in top soil layer (Nordin et al. 2005), hence recovery of the nutrient content might occur in the WTH stand.

The disturbance and/or reduction of soil nutrients caused by the severe WTH had a positive effect on species richness, likely providing opportunity for the oligotrophic species to establish. This apparently influenced succession, suggesting formation of a diverse oligotrophic ground cover community. Considering similarity of vegetation in the WTH and mature stands due to higher proportion of later successional species, such management might be applicable for the restoration of oligotrophic stands. This also suggests that 47 years have been sufficient period for the ground cover vegetation to recover. Nevertheless, before recommendations for application of such management method could be given, studies covering diverse forest types with more replications should be conducted.

The study was funded by the joint stock company “Latvijas Valsts Meži” project “Impact of forest management on forest and related ecosystem services”. We acknowledge Didzis Elferts for suggestion in data analysis.