Prinobius myardi Mulsant is a wood borer implicated in the decline of Mediterranean oaks, especially Quercus suber L. and Quercus ilex L. Plant volatiles play an important role in plant-insect interactions, and electroantennography (EAG) is an effective tool for exploring the electrophysiological activity of host plant volatiles on insects. To improve our understanding of the olfactory sensitivity of P. myardi, we recorded EAG responses to 20 tree volatiles, and analyzed the dose-dependent response to five doses (10–4:1 to 1:1 v/v) of the three most EAG-active compounds. Antennae of P. myardi responded to 13 chemicals, mainly monoterpenes and green leaf volatiles, with the strongest EAG responses being observed with β-pinene, (+)-α-pinene and 1,8-cineole. Dose–response profiles showed positive dose-dependent responses for all three compounds. Our results suggest a broad sensitivity of P. myardi to common tree volatiles, particularly some host-related compounds and volatiles associated with wounded trees; the olfactory recognition of ratios of these compounds could play a role in host selection by P. myardi.

Prinobius myardi is a large (up to 60 mm long), holomediterranean species with nocturnal habits, whose larvae bore into wood of several deciduous tree species, especially weakened cork and holm oaks, causing tree branches and trunks to break (López-Pantoja et al. 2011). In addition, these insects facilitate infection by both plant pathogens and wood-decaying fungi (Martin et al. 2005). Despite these effects, several aspects of the behavior of P. myardi are not well known, in particular, regarding its role in oak decline, host selection cues and the development of control methods (López-Pantoja et al. 2011; Torres-Vila et al. 2013).

To understand the olfactory sensitivity of P. myardi to plant volatiles, we examined: (a) the EAG responses of P. myardi to individual synthetic tree volatiles; and (b) the dose–response relationships for the three most EAG-active compounds.

Prinobius myardi adults were collected by hand picking during the flight period (July, 2004) in a Q. suber dehesa (Huelva, SW Spain). Insects (3.8 ± 0.4 cm long, 1.2 ± 0.3 g weight; on average) were kept in individual containers with access to a 4% sugar solution, in semi-darkness (at 23–32 °C). Notably, P. myardi females were difficult to capture (the average female:male capture ratio being 0.28 over eight years (López-Pantoja et al. 2011)), and most of those collected died within 24 hours.

EAG responses were recorded 1 to 7 days (mean of 4 days) after insect collection, as in Sánchez-Osorio et al. (2007), using glass capillary electrodes (0.5-mm internal diameter) filled with saline solution (KCL 0.1 N, with 3% polyvinylpyrrolidone) and slipped over silver wire. The distal end of the antenna was inserted into the tip of the recording electrode; and the indifferent electrode (same glass capillary, custom-pulled to an approximately 100-µm tip diameter) was inserted through the membrane between scape and pedicel. Each chemical compound tested was dissolved in hexane (Sigma-Aldrich, 99% purity) to prepare odor sources, and 20-µl aliquots of these solutions were applied to filter paper strips (Whatman No 1). The solvent was allowed to evaporate for 5 min before each paper strip was inserted into a glass Pasteur pipette. For stimulation, 10-ml puffs of air were blown through the Pasteur pipettes into a purified air stream continuously flowing over the antenna (4 l min–1), using a Windjet 727-RY-15 diffuser (Spraying Systems GmbH, Hamburg, Germany) to ensure covering the entire antenna length. EAG responses were recorded (in mV) using Syntech electrode holders, IDAC-4 acquisition controller and Autospike-32 software (Syntech, Hilversum, The Netherlands).

In Experiment 1, EAG responses were recorded in five stimulation series of four randomly-puffed individual odor sources (1:1 v/v dilution of each compound in hexane). Each series was preceded by a stimulus with turpentine standard as a reference for EAG response over the session; a last turpentine stimulus was also applied 10 min after the last series. There was a 10-min interval between series, and 1-min interval between stimulations within a series. The same seven insects (five males and two females) were tested with all the compounds (one replication per individual and per compound).

In Experiment 2, the three compounds eliciting the strongest EAG responses in Experiment 1 – β-pinene, (+)-α-pinene and 1,8-cineole – were presented at five doses increasing by orders of magnitude from 10–4:1 (corresponding to 858–923 ηg depending on the chemical) to 1:1 v/v in hexane. For each chemical, dose–response was tested in five stimulation series with three replicates for each dose, preceded by a stimulus with turpentine standard. In this case, there were 1-min intervals between series, and between replicates within series; a last turpentine stimulus was applied 1 min after the last series, and 10-min intervals separated tests with different compounds. We calculated the mean response from the three replicates of a specific dose to minimize variation associated with manual injections. The dose–response was tested for each of the three chemicals using the same five insects (three males and two females, different individuals from those used for experiment 1).

Measured EAG responses were corrected by subtracting the mean response to two hexane control injections (20 µl) recorded at the beginning and end of each series in both experiments, to compensate for solvent and/or mechanoreceptive artifacts. Corrected measures were then normalized to percentages relative to the EAG response obtained to the standard stimuli, namely, the mean of the EAG responses to the two turpentine injections between which the response to each chemical or specific dose was recorded (Yang et al. 2013).

Grubbs’s tests showed outliers in male EAG responses, probably due to the heterogeneous vitality of field-caught insects, and hence, normality and homoscedasticity assumptions were not met. In such cases, robust statistical methods have been recommended (Wilcox 2012). EAG responses were compared using functions implemented in the WRS package (Wilcox 2012), based on 20% trimmed means (Mean0.2: mean calculated after discarding the top and bottom 20% of values). Two-sided confidence intervals for the difference in Mean0.2 EAG responses revealed no differences between sexes for any of the tested compounds (P > 0.1), and hence, EAG data from males and females were pooled.

Data from both experiments were analyzed using heteroscedastic ANOVA for related samples (two-way analysis for Experiment 2), followed by Rom’s modified Bonferroni tests for multiple comparisons. One-sided confidence intervals based on the Mean0.2 for related samples were used to assess whether normalized (uncorrected) EAG responses to individual compounds were larger than the response to the hexane control. All statistical analyses were performed using the R framework (R Development Core Team 2014, version 3.1.1), with α = 0.05, employing corrected (except when comparing to hexane controls) and then normalized EAG values.

EAG signals showed the typical rapid depolarization followed by a slower recovery phase. The EAG response to standard turpentine was weak (0.38 ± 0.17 mV, Mean0.2 ± Error0.2, N = 7) and to the hexane control was negligible (Mean0.2 < 0.01 mV, N = 7). Compared to the hexane control, EAG responses were significantly higher for 13 compounds: all tested monoterpenes except ρ-cymene and α-terpineol, the three GLVs and 3-methyl-butanol. 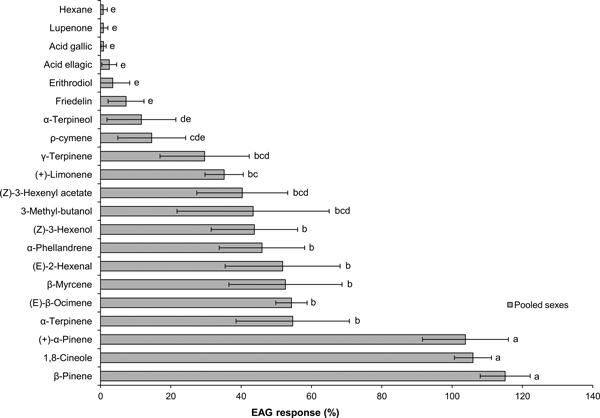 Fig. 1. Mean0.2 (± Error0.2) EAG responses of Prinobius myardi to tree volatiles. Responses are expressed as normalized percentages relative to the standard reference (turpentine oil), after subtracting the response to the hexane control. The hexane control response is included for comparison. Bars with the same letter are not significantly different (heteroscedastic ANOVA for related samples, N = 7).

In Experiment 2, responses to the three strongest stimulants was significantly dose dependent (Fig. 2), with no significant dose and compound interaction (ANOVA: P < 0.001, P = 0.462, and P = 0.181; respectively for dose, compound, dose × compound). No or negligible EAG responses were elicited by 10–2:1 and lower doses. Dose–response profiles did not indicate that any saturation threshold had been reached; however, a 1:1 dose of 1,8-cineole did not elicit a significantly higher EAG response than a 10–1:1 dose (P = 0.160). 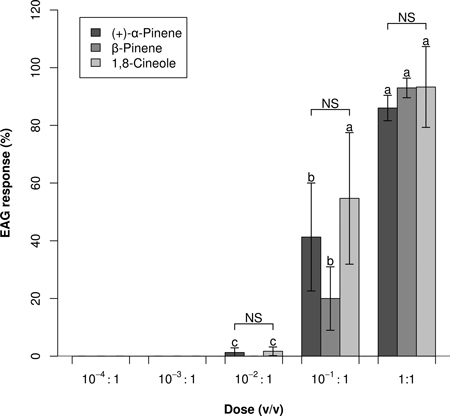 Fig. 2. Dose–response EAG profiles (Mean0.2 ± Error0.2) of Prinobius myardi. Responses are expressed as normalized percentages relative to the standard reference turpentine oil (not shown). For each compound, letters on the columns denote differences between doses; NS indicates no significant difference between compounds at each dose (heteroscedastic ANOVA for related samples, N = 5).

Using olfactory receptor neurons for common plant compounds allows insects to evaluate greater ranges of potential hosts (Bruce et al. 2005). It is not possible to directly match EAG responses to a behavioral activity (e.g., attraction or repulsion); and moreover, the heterogeneous vitality of the insects (survival after EAG test: 3–18 days in males; 1–2 days for females) and the small sample could have biased EAG responses. However, our results allow us to formulate a tentative two-stage hypothesis concerning reliance on common tree volatiles in host location by P. myardi, which should be further explored. At a first stage, the specific recognition of strong EAG-active compounds – β-pinene, (+)-α-pinene and 1,8-cineole – could help distinguish suitable from unsuitable hosts at patch scale (e.g., avoiding non-host Pinus and Eucalyptus genera, which include 1,8-cineole as a major terpenic component. Barata et al. 2000; Blanch et al. 2007) and possibly also within patches, enabling P. myardi to recognize trees with pinene chemotype (and, in turn, this could influence the probability of conspecific encounters, as suggested for C. welensii based on Q. suber leaf chemotypes). At a second stage, P. myardi could use specific ratios of several compounds eliciting moderate EAG responses to identify blends of volatiles characterizing host species, even at the intraspecific level (e.g., relative fractions of limonene and myrcene in terpenic emission from Q. ilex and Q. suber), or wounded trees (e.g., some GLVs, (E)-β-ocimene or 3-methyl-butanol).

Behaviorally-active semiochemicals, such as host plant volatiles, have potential applications in integrated pest management including for monitoring and mass-trapping programs (Allison et al. 2004; Smart et al. 2013). Our results are promising as a basis for such applications in P. myardi, especially in the context of declining oak populations, as is the case for Q. suber and Q. ilex dehesas. However, there is a need for further studies focused on improving electrophysiological testing (especially with females) for tree volatiles, as well as performing behavioral bioassays (field trials with baited traps, and flight tunnels) to thoroughly investigate activity induced by EAG-active compounds.

This work was funded by the Andalusian Regional Council of Environment and Spatial Planning.