Forest fire is one of the natural disturbances, which have important ecological and socioeconomical effect. Although fire activity is driven by weather conditions, during past two centuries forest fires have been strongly anthropogenically controlled. In this study, teleconnection between sea surface temperature (SST) in the Atlantic, which influences climate in Europe, and forest fire activity in Latvia and Estonia was assessed using “Climate explorer” web-tool. Factors affecting number and area of forest fires in Latvia and Estonia differed, suggesting regional specifics. In Estonia, the number of fires correlated with the SST in the North Atlantic in spring and summer, which affects the inflow of cool and dry air masses from the Arctic, hence the aridity and burnability. The area of fires in Estonia and in Latvia was associated with increased SST in Baltic Sea and near the European coast in summer, which likely were consequences of occurrence of warm high-pressure systems in summer, causing hot and dry conditions. Nevertheless, the observed teleconnections could be used to predict activity of forest fires in Latvia and Estonia.

Forest fires, which are a part of natural disturbance in boreal and hemiboreal ecosystems, have considerable ecological and socioeconomical importance (Jogiste et al. 2017). During the past two centuries, forest fires have been considerably reduced by the advances in fire suppression systems (Niklasson and Granström 2000), still variation in activity of fires, i.e. ignition, behaviour, and spread, is driven by weather conditions (Wotton and Beverly 2007; Drobyshev et al. 2012). Hence, information on climatic drivers is necessary for projections of future forest fire activity under shifting climate (Bowman et al. 2009; Lehtonen et al. 2016).

Weather in the Northern Europe is largely determined by large scale weather systems forming above the Atlantic Ocean, which control inflow of warm and moist air mases, thus determine temperature and moisture regime (Sutton and Hudson 2005). The influence of such large-scale systems expresses annual, as well as multi-decadal variations e.g., North Atlantic Oscillation, Atlantic Multidecadal Oscillation (AMO), etc., which result from ocean-atmosphere interactions (Schubert et al. 2016). Accordingly, linkage between forest fires and conditions in the Northern Atlantic (e.g., surface water temperature that influence latitudinal distribution of summer precipitation) have been documented in Scandinavia (Drobyshev et al. 2016). Nevertheless, these teleconnections appeared regional, as the linkage of forest fires with sea surface temperature (SST) of the Northern Atlantic was the most pronounced in the northern part of Sweden (Drobyshev et al. 2016), hence regional analysis is needed (Bowman et al. 2009). Still, such teleconnections have been poorly studied (Drobyshev et al. 2016). The aim of this study was to assess linkage between number (NF) and area (AF) of forest fires in Latvia and Estonia and SST in the Northern Atlantic during the past century. We hypothesised that such teleconnections can be detected, yet the drivers of forest fires in Latvia and Estonia differ due to geographic location.

Considering changes in forest cover, fire data was expressed per unit of forest area. The time series were log transformed to ensure normality of the distributions, and detrended. A simple linear function was used to remove low frequency (century) trends, likely associated with the advance of fire management systems, yet preserving medium- and high-frequency variation. Pearson correlation analysis was applied to assess the relationships between the SST for the available data points within the area limited by 20–80°N and 80°W–30°E, and the national chronologies of NF and AF. The analysis was conducted for the maximum period covered by the chronologies. The SST for the January–October period average for months and three-month intervals were tested. The significance of the correlations was determined by a two-sided Student t-test, accounting for the autocorrelation in time series, when adjusting the critical t-values (Trouet and Oldenborgh 2013). For each correlation map, field significance, which describes the strength of correlation at the scale of the studied region, was calculated (Wilks 2006). The “Climate Explorer” web-tool was used for the analysis (Trouet and Oldenborgh 2013).

The produced national chronologies of NF and AF (Fig. 1) contained high- and medium-frequency variation. The range and variant of indices was higher for AF rather than NF; nevertheless, the chronologies were rather synchronous, as the mean synchrony coefficient was 0.75 (Table 1). 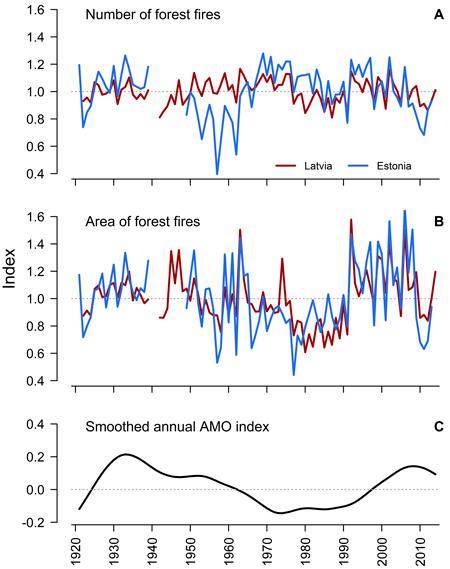 Fig. 1. Chronologies of number (A) and area (B) of forest fires in Latvia and Estonia, and smoothed annual Atlantic Multidecadal Oscillation index (C).

In Latvia, NF and AF showed stronger correlation than in Estonia (Table 1). The correlation coefficients between the chronologies were lower (average) (mean r = 0.52), suggesting differing sources of variation. The highest correlation was observed between AF in Latvia and Estonia, suggesting regional signal, yet the lowest correlation occurred between AF in Latvia and NF in Estonia, likely due to differences in medium-frequency variation. The low-frequency variation particularly in AF roughly followed the trend in AMO (Fig. 1).

Chronologies of AF and NF in Latvia and Estonia correlated with the SST of the Atlantic (Fig. 2), yet the effect (strength of correlation) and periods (months) of influence differed. The NF in Estonia was negatively correlated with the SST in North Atlantic during spring and summer, particularly in May and August, yet positive correlation was observed with summer SST in the North Sea and in the Baltic Sea. The AF in Estonia showed positive correlation with spring SST in mid-latitude Atlantic and summer SST along Atlantic coast of Europe. Spring SST in mid-latitude Atlantic negatively correlated with NF in Latvia, while positive relationships were observed with summer SST in the Baltic Sea and the North Sea. The calculated field significance was intermediate (<0.10), implying probable teleconnections. 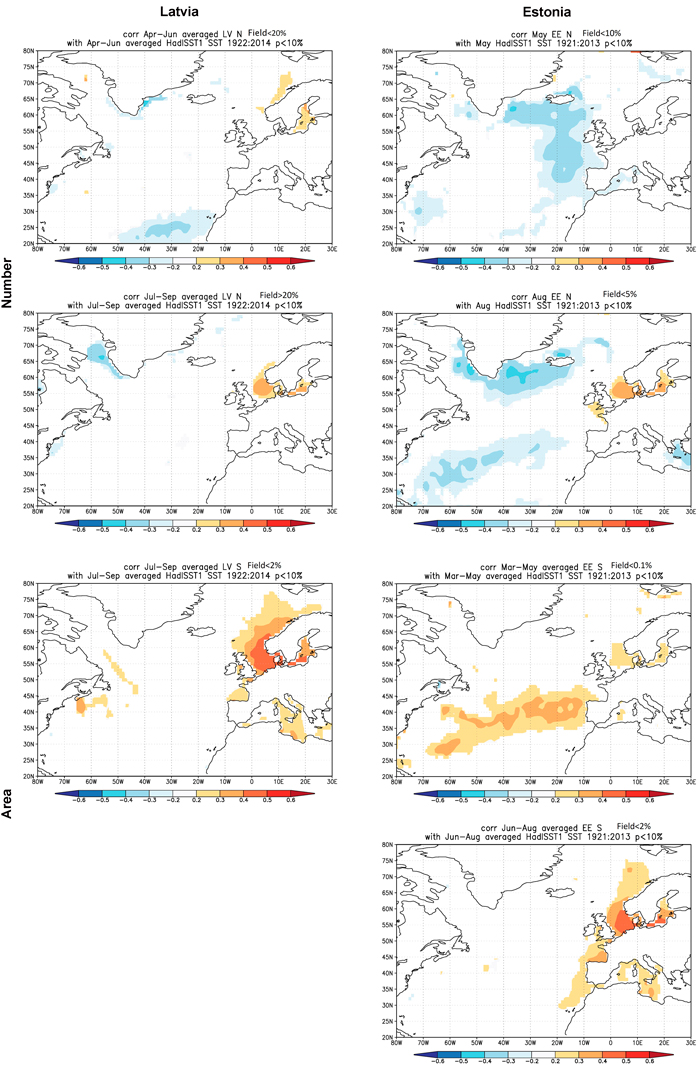 Fig. 2. Correlation between the sea surface temperature and chronologies of number and area of forest fires in Latvia and Estonia during the periods of 1922–2014 and 1921–2013, respectively. Only the months showing the highest correlations with the chronologies are plotted. Field significance are plotted. Correlations significant at p-value < 0.10 are marked with colour. View larger in new window/tab

The synchrony of the chronologies of AF and NF (Table 1) implied that common large-scale factors have forced variation in forest fire activity in Latvia and Estonia, yet the lower correlation between the chronologies suggested that influence of these factors on AF and NF differed. This apparently resulted in region-specific variation patterns of fire activity, as displayed by the correlations among chronologies (Table 1), that has been related to topography and climatic conditions as well as atmospheric circulation (Drobyshev et al. 2012). Still, some systematic bias particularly in fire area data might have been introduced due to political reasons. In the Soviet Union, the area of fires was the measure of efficiency of forest management system, hence the data might have been underestimated yet this might have differed among the Soviet Republics (Saliņš 1999).

As hypothesized, teleconnection between SST and the chronologies of AF and NF in Latvia and Estonia (Fig. 2) were observed, supporting linkage between fire activity and conditions in the Atlantic via alterations in atmospheric circulations (Colman and Davey 1999; Drobyshev et al. 2016). This was also supported by variation of AMO (Fig. 1). Teleconnections between North Atlantic SST and fire activity in northern Sweden (above 60°N) has been related to inflow of cool and dry arctic air masses in summer, which increase fire activity (Drobyshev et al. 2016). In our study, similar, yet less pronounced pattern of correlations between North Atlantic SST and NF in Estonia was observed (Fig. 2). This might be related to of N–S gradient of large-scale atmospheric circulations (Drobyshev et al. 2016) and regional landscape specifics (Hellberg et al. 2004). However, this teleconnection was not observed in Latvia (Fig. 2), probably due to more southern location (around 57°N) (Drobyshev et al. 2016), explaining divergence of particularly NF variation patterns (Fig. 1).

Positive correlations between Baltic Sea SST and AF in both countries and NF in Latvia (Fig. 2), might be related to regional atmospheric-sea interactions (Stramska and Bialogrodzka 2015). In summer in Baltic Sea region, meridional weather pattern prevails (Keevallik et al. 1999) and, in combination with high pressure systems, promotes establishment of dry and fire-prone weather conditions (Jaagus et al. 2010; Sutton and Hodson 2005). Effect of this atmospheric circulation is supported by teleconnections with SST in Mediterranean and North Seas (Fig. 2) related to large-scale oceanic-atmospheric interactions (Ionita et al. 2017; Schubert et al. 2016). Increased SST along the coastline of Europe reduce meridional gradient of temperatures, resulting northward shifts of storm track, thus enhancing creation of large-scale drought periods in Europe (Feudale and Shukla 2010). Co-occurrence of synchronous precipitation-evaporation and SST patterns between Mediterranean, North and Baltic Seas have been also observed by Zveryaev and Allan (2010) and Ionita et al. (2017).

Diverse mechanisms appeared to influence forest fire activity in Latvia and Estonia. The linkage with the North Atlantic SST, which affects inflow of cool and dry air from Arctic (Drobyshev et al. 2016), might be used to predict number of ignitions in Estonia, while magnitude (area) of forest fires was more connected to the meridional atmospheric circulation and occurrence of warm high pressure systems. These systems, apparently, were the main determinants of fire activity in Latvia; and, although not clearly causal, such teleconnection might be applied to predict NF and particularly AF. Although, many uncertainties about the mechanisms of North Atlantic SST and European climate persists (Ionita et al. 2017), further research at finer-scale is needed to reveal nonstationary relationships between SST and other regional climatic variables (Ionita et al. 2017; Schubert et al. 2016).

The study was funded by the joint stock company “Latvijas valsts meži” research project “Forecast of changes of forest management risks and their minimization”.