The height growth of trees influences the productivity of stands and the competitiveness of species, shaping the range of their distribution. Dominant height growth was assessed for European beech (Fagus sylvatica L.), growing outside of its natural distribution range in the western part of Latvia. In 10 neighbouring experimental stands, 20 dominant trees were felled for stem analysis. Height growth was modelled using the generalised algebraic difference approach, applying several non-linear equations and mixed procedures. The Chapman-Richards and Sloboda models showed the best fit to the data. Height growth of the second generation (younger) trees exceeded that of the first generation, and followed curve for a higher site index, suggesting sufficient adaptation and improving conditions. Height growth of the studied beech exceeded predictions for beech in southern Sweden, which is considered to be the northern limit of the species range, yet the growth pattern differed. In Latvia, slower height growth was estimated for site indices < 32 m (in 100 years) during the first 60 years, yet larger maximal height was predicted, suggesting a longer establishment period. Nevertheless, the improving height growth indicated increasing potential for the application of the species in commercial forestry, and an expansion of the species within the region even during the 21th century.

Bioclimatic models predict that conditions in the Baltic States would become suitable for European beech (Fagus sylvatica L.) by the end of the 21st century; accordingly, shifts in the geographic distribution of the species are expected (Kramer et al. 2010; Hickler et al. 2012). Improved growth of beech has been observed in southern Sweden (cf. Falkengren-Grerup and Eriksson 1990). The distribution limits of trees have been related to primary growth rate (Loehle 1998); hence, the spread of a species is influenced by the success of height increment and competition (Seynave et al. 2008). Height increment is also among the main parameters that influence the productivity of stands (Burton 2012); and such information is valuable for the prediction of growth under current and future climates. In this regard, experimental plantations outside the natural range serve as useful indicators for the adaptive capacity of the species, particularly in the context of climatic change (Seynave et al. 2008; Kreyling et al. 2014).

In 2017, 20 dominant sample trees, growing in 10 unthinned stands of different ages (ca. 70, 110 and 140 years), were felled for stem analysis. The dominant trees were selected to avoid the effects of competition (Brunner and Nigh 2000). Stem disks were taken at 0.2 (stump), 1.3, and every 2 m above the base heights. The surface of the stem disks was grinded and the number of tree-rings was counted under a microscope. The cambial age of the trees at each height was determined. Tree height was corrected for ‘hidden tops’ using the Carmean (1972) correction. The oldest trees (age > 100 years) originated from seed material transferred from northern Germany (exact provenance unknown); the younger trees were propagated from local seed material, representing the second generation. The initial spacing of the plantations was 2 × 2 m.

Dominant height growth was modelled using non-linear Chapman-Richards, Hossfeld, King-Prodan, log-logistic, Sloboda, and Strand equations (Table 1), transformed according to the generalised algebraic difference approach (Cieszewski and Baily 2000; Sharma et al. 2011). Such models have been applied for height growth modelling (Sharma et al. 2011), as they are polymorphic, allowing site-specific parameters, e.g., multiple asymptotes, and are base-age invariant (Cieszewski and Baily 2000). The models were developed for dominant heights above 1.3 m. Time-series of tree heights were reorganised to height difference for each observation period, where h0 was the height at age t0, and h1 was the height at age t1 (in metres and years, respectively). The mean ± standard error age, when the studied beech had reached breast height, was 4.7 ± 0.4 years.

The developed dominant height models showed a slightly differing fit to the measurements (Table 2) and conformance with the biological realism principle (Fig. 1). For most of the models, errors were similar (MR ≤ 0.53 m and RMSE ≤ 0.66, except for Hossfeld I, which showed higher errors), and the R2-values were high (>0.99, Table 2). The t-values of the parameter estimates mostly exceeded 2.0, except for the single parameters in the Chapman-Richards and log-logistic models. According to the AIC, the Sloboda and Chapman-Richards models showed the best fit, while the Hossfeld’s and log-logistic models showed the weakest fit to the data. The variance of random effects was < 2.50. 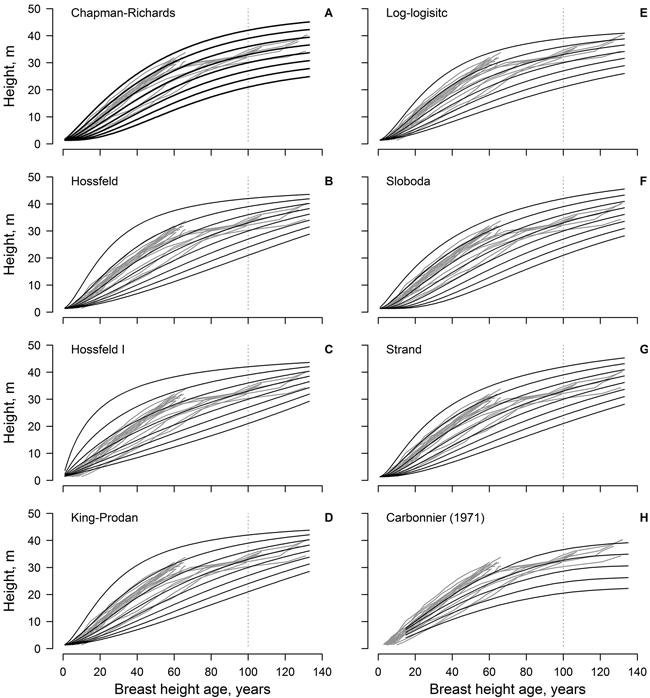 The Sloboda and Chapman-Richards models appeared to be the most realistic, as the modelled curves followed, and encompassed, the measured time-series throughout the reference period (Fig. 1). These models (particularly the Sloboda model) predicted slow height growth in the initial stage of stand (first 20 years) for site indices ≤ 27 m in 100 years. In addition, these models showed the best conformity with the improving height growth of the younger trees (ca. 70 years old). The Strand model showed similar tendencies, yet was more optimistic regarding the highest site indices. The log-logistic model was the most conservative, predicting the lowest maximum tree heights, yet it showed lower conformance with measurements at a younger age (<20 years). The Hossfeld and King-Prodan models overestimated height increment for the site indices > 36 m during the first 60–70 years, obviously exceeding the biologically possible growth.

The dominant height models (yield tables) developed in southern Sweden (cf. Carbonnier 1971) showed weak conformity with the observed height growth of the studied beech, particularly regarding the younger trees (ca. 70 years old) and the lower site indices (Fig. 1). In addition, height growth of the younger trees exceeded the range of the yield table (cf. Carbonnier 1971) predictions. The predictions of the yield table also showed high bias, compared to the best of the developed modes (Chapman-Richards, and particularly Sloboda): overestimation at younger age (<100 years) and underestimation at the older age (Fig. 2). The bias was stronger for the lower site indices. 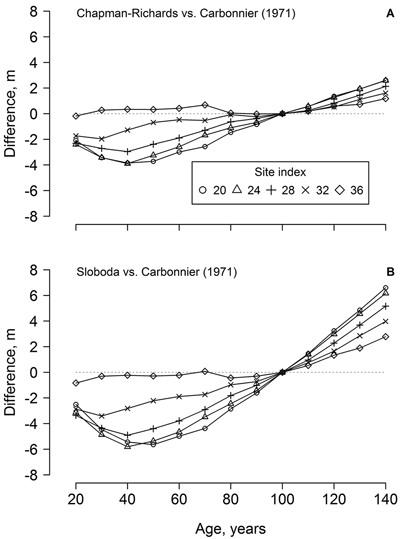 Fig. 2. The differences between beech dominant height predicted by the developed Chapman-Richards (A) and Sloboda (B) models in the western part of Latvia and yield tables for southern Sweden (cf. Carbonnier 1971) according to stand age and site index.

The fit statistics (Table 2) and biological realism (Fig. 1) indicated the Chapman-Richards and, particularly, Sloboda model, which showed higher t-values of the parameters, as the best for estimating the dominant height of beech in the western part of Latvia. The differences in precision of the parameter estimates of these models (Table 2) were likely caused by the limited dataset (Sharma et al. 2011). Although the dominant height models are often region-specific (Sharma et al. 2011), wider verification of the developed models within the region was impossible, due to an absence of beech stands. The models were developed based on even-aged plantation (Fig. 1), and their predictions might be biased for stands with extreme density (Brunner and Nigh 2000; Sharma et al. 2011).

Considering that climatic changes appear beneficial for beech growth in the Northern Europe (Falkengren-Grerup and Eriksson 1990; Kramer et al. 2010), improved height growth, following the curve for a better site, was observed for the younger (second generation) trees (Fig. 1). This relates to the climatic component of site quality for species growing in marginal populations (Sharma et al. 2012; Kreyling et al. 2014). Improved tree growth has also been related to eutrophication (Pretzsch et al. 2014). Alternatively, improved growth of the second generation trees might be related to the natural and anthropogenic selection of the best adapted genotypes (Matisons et al. 2017).

The dominant height models from southern Sweden (Carbonnier 1971) showed rather poor conformity with the height growth of beech in the western part of Latvia, particularly for site indices < 32 m (Fig. 2), which, however, were not represented by the measurements (Fig. 1). Under harsher climatic conditions in Latvia (compared to southern Sweden), a longer time appeared necessary for beech to establish, explaining the deviations from the yield tables (Fig. 2). Slower establishment (extended “lag” phase of growth), which is ordinarily for shade-tolerant species (Seynave et al. 2008; Sharma et al. 2011), was predicted by the Chapman-Richards and, particularly, the Sloboda models (Fig. 1). The yield tables (cf. Carbonnier 1971) also underestimated height growth in longer term (>100 years, Fig. 2), indicating improving growing conditions for beech in the western part of Latvia. Still, the Carbonnier (1971) model might be outdated, due to warming and eutrophication (Falkengren-Grerup and Eriksson 1990; Sharma et al. 2012). Nevertheless, height growth of the younger trees exceeded the predictions of the yield table (Fig. 1 H), indicating improving growing conditions (cf. Carbonnier 1971) and, hence, a rising potential for wider distribution of beech in the Baltics.

The developed dominant height models indicated high forestry potential of European beech in the western part of Latvia, particularly for the planting material propagated from local plantations. Accordingly, beech could be approbated for wider application in commercial forestry within the region in the near future. Still, verification of these models on a larger dataset, containing a wider spectrum of site indices, would be necessary to increase the accuracy of the estimates.

The study was funded by the research program “The value and dynamic of Latvia’s ecosystems under changing climate – EVIDEnT”. We acknowledge Andis Adamovičs and Juris Katrevičs, who helped during sampling.

Dreimanis A. (1995). The beech and the larch-tree in Shkede forestry. Proceedings of 75th Conference of Latvia University of Agriculture 5: 94–97.