Initial fertilisation, when the fertilizer is supplied during the plantation, is applied to improve the competitive ability of the seedlings and hence to increase their growth and productivity; however, fertilization could also alter wood properties and timber quality. In this study, the dimensions and tree-ring parameters – width, proportion of latewood, maximum and mean density, mean earlywood and latewood density – of initially fertilized (by 14, 6 and 11 g of N, P and K per seedling, respectively) Norway spruce (Picea abies Karst.) growing in an experimental plantation in Kalsnava, Latvia (temperate climate region) were assessed. The fertilization significantly increased the dimensions of trees in long-term (ca. 17% increase of stemwood volume). The analysis of tree-ring width suggested that the duration of the effect was ca. 15 years. The maximum and latewood density were higher for the fertilized trees only in a few years. The mean and earlywood density of tree-rings were mainly similar for both treatments. Altogether, considering the one-time application of a limited amount of fertilizer, such treatment had notable and lasting effect on Norway spruce.

Fertilization is one of the most effective means of increasing the productivity of stands, especially for the nutrient-demanding species (Nohrstedt 2001; Saarsalmi and Mälkönen 2001; Sicard et al. 2006). However, fertilization also alters wood properties such as cell wall thickness, affecting wood density and hence the quality of timber (Mäkinen et al. 2002; Lundgren 2004; Cao et al. 2008). The gain from the fertilization might depend on the timing and manner of its application, as the positive effect might be diminished by e.g. competition (Nohrstedt 2001) or leakage (Ingerslev 1997). Still, the positive effect of fertilization of young Norway spruce (Picea abies Karst.) has been shown to persist up to eight years (Tamm 1965). The initial fertilization, when a limited amount of fertilizer is applied locally, before or during the plantation, has been used to boost the early growth of seedlings/saplings of spruce and hence to improve their competitive ability (Sicard et al. 2006), which strongly affects further development of a stand (Sutton 1995; Hytönen and Jylhä 2008). However, a rather small effect of such management on the increment has been reported (Sutton 1995). The effect of the initial fertilization on tree-ring properties and hence the physical strength and/or conductive properties of wood has been studied poorly. The aim of this study was to evaluate the effect of the initial fertilization on growth and tree-ring properties of Norway spruce in Latvia. We hypothesised that fertilization had a lasting effect on tree-ring properties.

The study was carried out in the eastern part of Latvia (56°42´N, 25°57´E). The topography of the site was flat with elevation ca. 110 m a.s.l.; soil was loamy. Climate is mild, the mean annual temperature is ca. +6 °C; the monthly mean temperature ranges from –6.4 to +17.1 °C in January and July, respectively. The growing season extends for ca. 180 days. The annual sum of precipitation is ca.700 mm; approximately half of it falls during the June–September period.

The experimental plantation of Norway spruce was established in 1982 in Hylocomiosa forest type (Bušs 1976), planting 4-year-old bare-rooted saplings from a local provenance, enclosed in pressed peat capsules “Brika” (Rubtsow 1979), in prepared soil with the density of 4000 trees per ha, in four blocks by 200 trees within each. Directly after the planting, each sapling received ring fertilization at 10 cm distance, 14, 6 and 11 g of N (NH4NO3), P (superphosphate) and K (KNO3) per sapling (equalling 56, 24 and 44 kg ha-1), respectively. The treatment was applied for the entire blocks. Chemical weed control, by sprinkling simazine (3 kg ha-1) solution around the saplings, was applied twice during the first year.

In October 2013, a 5-mm increment core at the breast height was collected from 30 fertilized and 30 control undamaged dominant trees. In the laboratory, the increment cores were processed using the LignoStation wood analysis system (RinnTECH Inc., Heidelberg, Germany). A high-resolution (50 microns) wood density profile was acquired for each core using high-frequency probe (Schinker et al. 2003). For each tree-ring, 1) width, 2) latewood width, 3) mean density, density of 4) earlywood and 5) latewood and 6) maximum density was measured. The part of the tree-ring with density > 50% of the maximum density was considered as latewood. Additionally, data on height and diameter at 1.3 m height of 586 fertilized and 592 control trees were obtained from the inventory conducted in February 2012.

Considering that the outermost tree-ring(s) were sometimes lost during the sampling, the measured time series were crossdated and their quality was verified by a graphical inspection and statistically using the program COFECHA (Grissino-Mayer 2001), based on the tree-ring width. The time series, which had inconsistent dating, i.e. a match with the rest of the series both with and without a certain lag, were not used to avoid errors (Supplementary file 1). The time series of the measured tree-ring parameters of 24 fertilized and 24 control trees were crossdated consistently and passed the quality check. The comparison of tree-ring parameters of the analysed and the rejected trees is shown in Supplementary file 2. The proportion of latewood width (latewood width/tree-ring width) was calculated to describe the composition of tree-rings. The similarity of mean time series of the fertilized and control trees was described by Pearson correlation and Gleichläufigkeit (GLK) coefficients (Speer 2010). The tree-ring parameters for each year, mean time series of parameters and dimensions between the fertilized and control trees were compared by a t-test.

The initial fertilization resulted in significantly (p-value < 0.01) higher dimensions (by ca. 3% and 7% and 17% for height, diameter and volume of stem, respectively) of spruce at the age of 34 years (Fig. 1). Statistics of the crossdated time series of the tree-ring parameters are shown in Table 1. The fertilization affected wood properties of Norway spruce as shown by the significant differences in mean values of some tree-ring parameters between the fertilized and control trees. The maximum and latewood density was significantly higher and the mean proportion of latewood was significantly lower for the fertilized trees (Table 1). The annual variation amongst the tree-ring parameters differed notably, but it was similar for the fertilized and control trees, and the mean time series calculated for them were rather synchronous (GLK > 0.55) (Table 2). The strength of the correlation between mean time series differed for the parameters (Table 2), it was weaker for the maximum and latewood density (0.40 and 0.53, respectively), suggesting that fertilisation has affected their patterns of annual variation. 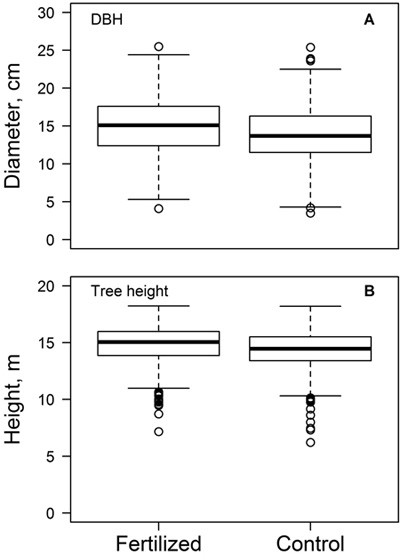 Fig. 1. Height (A) and diameter at breast height (DBH) (B) of fertilized and control Norway spruce in winter of 2012 at the age of 34 years. Line shows median, box represents 1st and 3rd quartile, whiskers mark range (not exceeding 150% of interquartile distance) and circles denote outliers of the datasets. 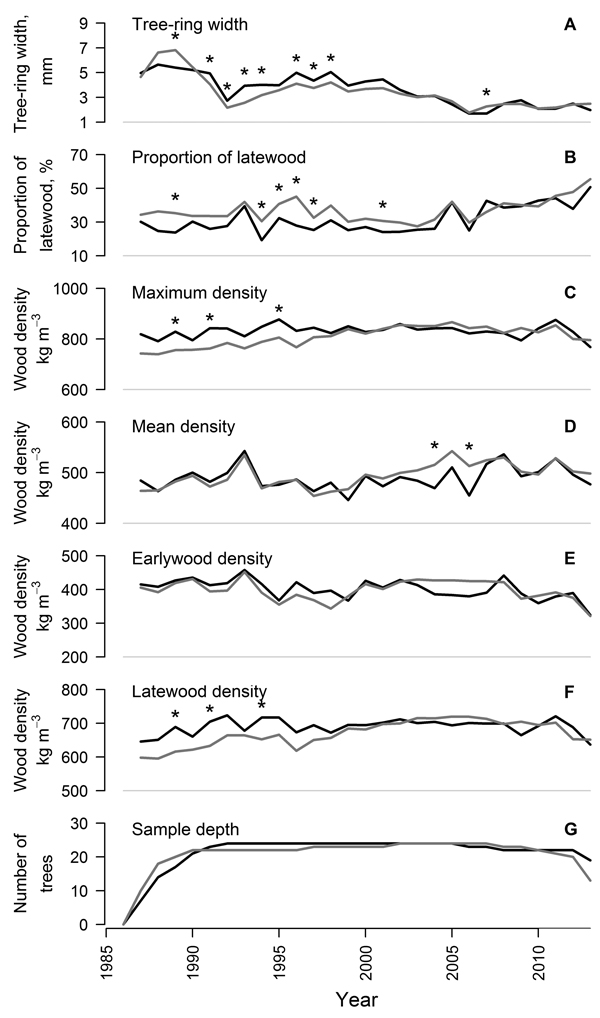 The local application of initial NPK fertilization on saplings increased the dimensions of Norway spruce at the age of 34 years (Fig. 1), suggesting lasting effect of such treatment as previously observed in Central Europe (Sicard et al. 2006). The duration of the effect was evidenced by the significant differences in tree-ring width, proportion of latewood and maximum density for up to 15 years (Fig. 2 A, B). Generally, the fertilisation efficiently boosted early growth of the saplings, likely relieving them from the competition during the next years (Nilsson and Örlander 1999; Hytönen and Jylhä 2008). The reaction of Norway spruce to local fertilization (Fig. 1) was similar to that when the entire area of stand has been evenly fertilized (Nohrstedt 2001; Saarsalmi and Mälkönen 2001; Cao et al. 2008), although less nutrients were added per ha. Still, an inverse reaction to fertilization of radial increment was observed in the very beginning of the analysed period (Fig. 2 A). This might be explained by a slight over dosage of fertilizer, burdening early growth (Nohrstedt 2001; Saarsalmi and Mälkönen 2001), which, apparently, decreased after ca. 8 years, releasing the increment. Alternatively, this might be related to the differences in patterns of carbon allocation in the fertilized saplings (Alexsson and Alexsson 1986).

The differences in other tree-ring parameters during the first half of the analysed period were more consistent (Fig. 2). The fertilization decreased the proportion of latewood (Fig. 2 B) as previously observed by Mäkinen et al. (2002), likely decreasing the hardiness of heartwood (Zhang 1995). The fertilization also increased the maximum and latewood density (Fig. 2 C, F) that might be related to the differences in carbon allocation (Alexsson and Alexsson 1986). Nevertheless, this did not alter the mean tree-ring density (Fig. 2 D) as the contribution of the increased latewood density was likely countervailed by the higher proportion of the low-density earlywood. The earlywood is formed by thin-wall conducting cells; thus, its density was altered negligibly. The mean density of the fertilized trees was significantly lower compared to the control in 2004 and 2006 (Fig. 2 D) that might be related to higher environmental sensitivity of the faster growing trees (Martin-Benito et al. 2008).

The locally applied initial NPK fertilization increased the dimensions of Norway spruce at the age of 34 years and affected wood properties. The duration of the effect was ca. 15 years, likely due to the advances provided by higher rates of early growth. Nevertheless, the effect of fertilization was dual. Although fertilization improved the yields, it also increased the proportion of the softer earlywood. Hence, fertilisation did not affect mean tree-ring density; however, formation of a wider earlywood and denser latewood increased heterogeneity of wood.

Study was supported by European Social Fund project “Management of vital Norway spruce stands: ecological and technological aspects” (No. 2013/0022/1DP/1.1.1.2.0/13/APIA/VIAA/052). We also acknowledge Faculty of Biology of University of Latvia and Didzis Elferts, who provided access to the wood analysis system (acquired by ERAF project 2012/0001/2DP/2.1.1.3.1/11/IPIA/ VIAA/005). Andis Adamovičs helped during the collection of the material.