The projections of vegetation zones suggest increasing growth potential of European beech (Fagus sylvatica L.) in Northern Europe. Such changes usually are most apparent in the marginal populations. In this study, survival of young beech growing in an experimental plantation under canopy of a mixed coniferous stand in the central part of Latvia was assessed after 33 years since the establishment. The planting material originated from an older experimental stand in the western part of Latvia. Although, at present, the studied plantation could be considered as the northeasternmost beech stand in Europe, a good survival was observed – ca. 80% of the seedlings have survived, despite several cold spells of ca. –30 °C that occurred during the recent three decades. Additionally, some self-regeneration i.e. branch sprouting was observed. The saplings were rather low, as their mean height was ca. 4 m. Still, some individuals, which were growing under canopy openings, reached considerable dimensions; their height and stem diameter exceeded 10 m and 9 cm, respectively. The distribution of sapling dimensions had the reverse-J shape that is typical for shade tolerant species, indicating normal development of the beech regrowth. The crowns of saplings were narrow and the stems were spindly, suggesting that trees with a good stem quality might be bred. Hence, our results suggest that environmental conditions in the central part of Latvia have been satisfactory for beech, thus encouraging establishment of more extensive trials within the region.

Northward expansion of nemoral tree species is predicted in Northern Europe due to changes in climate (Hickler et al. 2012). The distribution model of European beech (Fagus sylvatica L.) suggests that conditions for its growth in the Baltic States might be suitable by the end of the 21st century (Kramer et al. 2010). Nevertheless, already at present, successful growth and regeneration of beech is observed in the western part of Latvia (Bolte et al. 2007; Jansons et al. 2015), suggesting adaptation of the species. In the central and eastern regions of Latvia, conditions, however, are considered unsuitable due to cold spells in winter, which the species have not been able to tolerate (Mangalis 2004; Bolte et al. 2007). Nevertheless, considering the observed warming (by ca. 2 °C during the last century), particularly due to increase of temperature in the dormant period (Lizuma et al. 2007), growth potential of beech already might be improved.

Mortality of planting material is a crucial parameter that influences profitability of forest management (Burton 2011). Regarding the species, which are planted outside their natural distribution area, increased mortality can be expected due to unfavourable climatic conditions (Fang and Lechowicz 2006; Burton 2011) or browsing by wildlife (Hansson 1985), while the risks related to pathogens might be lower (Hansson 1985). The climate-induced mortality of alien (introduced) species is often caused by weather extremes rather than mean values of weather parameters (Bolte et al. 2007), hence long term surveys are necessary to evaluate such effects. The aim of this study was to evaluate survival and growth of beech saplings in an experimental plantation in the central part of Latvia after 33 years since the establishment. We hypothesised that irrespectively of harsher climate, beech had a high survival, hence that the meteorological conditions were satisfactory for the existence of the species.

The study site was an experimental plantation of beech, established under the canopy of Scots pine (Pinus sylvestris L.) stand with Norway spruce (Picea abies (L.) H. Karst.) and silver birch (Betula pendula Roth.) admixture. The age of the stand was ca. 90 years; it was growing on moderately dry, fertile loamy soil with acidic reaction (Hylocomiosa type). The area of the plantation was ca. 3.5 ha. Beech was planted in summer of 1983 along the strip roads with the spacing of 0.75–0.95 m (mean 0.83 m) forming curved planting lines. The distance between the lines mainly ranged from 3.5 to 8.5 m. Seedlings were raised in a local nursery. The seed material was obtained from a stand located in the western part of Latvia (57°15´N, 22°41´E) (Bolte et al. 2007) where beech from northeastern Germany was introduced in 1890s. Unfortunately, no information about the total number of planted seedlings was available.

In the winter 2016, each beech sapling within the plantation was mapped. For this purpose, the territory was divided into regular 25×25 m plots. Within each plot, polar coordinates of beech saplings were fixed using theodolite with the precision of 20ʹʹ and 0.15 m for azimuth and radius, respectively. For each beech, height (± 0.10 m) and, for those above 1.6 m, also stem diameter at 1.3 m height (DBH, ± 0.5 mm) was measured. Additionally, length of the longest branch was estimated (± 0.10 m).

For each beech sapling, Cartesian coordinates relative to the plantation were calculated. Further, spatial data were processed using the QGIS v.1.8.0 software. For the estimation of the number of initially planted seedlings, the total length of planting lines was assessed by means of remote sensing. The number of planted seedlings was estimated according to the total length of planting lines and the mean initial spacing between the seedlings. The survival of beech was estimated as the fraction of accounted trees from the number of initially planted seedlings. For the description of crown form, length of the longest branch was expressed as the fraction of tree height. Additionally, stem taper was calculated where possible.

From the estimated ca. 5000 beech seedlings planted in 1983, 3975 were alive in autumn of 2015, resulting in the overall survival of 79.5%. Additionally, some self-regeneration (branch sprouting) was observed. The dimensions of beech varied considerably; the mean (±SD) height of saplings was 3.85 ± 2.30 m and the mean DBH (±SD) was 24 ± 20 mm; nevertheless, some individuals reached > 10 m in height and > 9 cm in DBH (Table 1). The median value of both variables was below the mean, suggesting that the smaller beeches were more frequent; hence, the distributions of height and DBH were positively skewed and had positive kurtosis (Fig. 1). The distribution of sapling height peaked in the second height class, i.e. 2–4 m, while nearly half of the saplings had DBH ≤ 20 mm, hence the distribution of DBH followed the reverse-J shape. The mean (±SD) relative length of the longest branch was ca. 26 ± 11% of tree height (Table 1), suggesting formation of narrow crown for the understory beech. The distribution of this parameter was positively skewed, implying that the relatively narrow crowns were prevailing (Fig. 1). Still, trees with considerably wider (> 50%) crowns were also observed, particularly in the lowest height classes. The mean (±SD) stem taper of saplings was 0.29 ± 0.20. 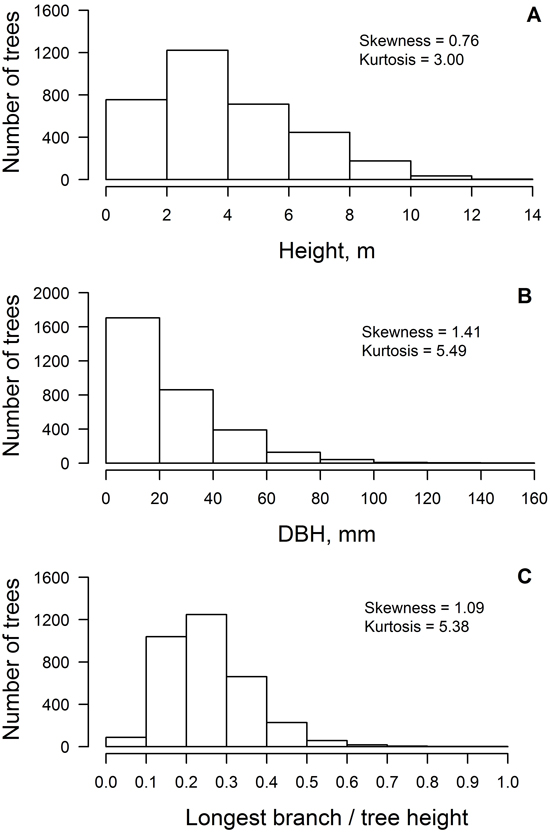 Fig. 1. Distribution of height (A), stem diameter at 1.3 m height (DBH, B) and the relative length of the longest branch (C) of the beech saplings.

Although the studied site at present could be considered as the northeasternmost plantation (stand) of beech in Europe (Bolte et al. 2007), good survival (ca. 80%) of saplings and evidence of self-regeneration during the period 1983–2015 suggested high growth potential of the species. Despite several cold spells (when temperature was ca. –30 °C) that occurred during the recent three decades, the climatic conditions in the central part of Latvia appeared non-limiting (suitable) for the existence of the species within a stand under shelterwood (Fang and Lechowicz 2006; Kramer et al. 2010). Alternatively, such a high survival of beech in the central part of Latvia might be related to the origin of seeds, which came from the trees adapted only to a slightly milder climate (Yakovlev et al. 2011), i.e. from the western part of Latvia.

The high survival and evidence of self-regeneration of beech in the central part of Latvia during the recent three decades are promising, suggesting successful adaptation, hence potentially increasing economic importance of the species already in the near future. Nevertheless, more information about the influence of stand structure and light conditions on the development of beech saplings is necessary. Our results also suggest that more trials i.e. in different growing conditions and regions can be established for more comprehensive assessment of the potential of the species in forestry in the Baltics.

The study was funded by the research program “The value and dynamic of Latvia’s ecosystems under changing climate – EVIDEnT”. We acknowledge Latvian Environment, Geology and Meteorology Centre for the climatic data. Juris Katrēvičs, Rolands Kāpostiņš and Andis Adamovičs much helped during data collection.