Artificial shortening of photoperiod by short-day (SD) treatment in late summer is a common measure in forest nurseries to induce growth cessation and frost hardiness development (Dormling et al. 1968; Heide 1974a; Colombo et al. 2001). Prior to autumn planting of Norway spruce (Picea abies (L.) Karst.) seedlings, 2–3 weeks of SD treatment is a common routine in forest nurseries in Norway, but SD treatment will also increase the hardiness level in seedlings intended for winter storage (L’Hirondelle et al. 2006). In addition, shoot elongation shows a more rapid response to the treatment than does diameter growth (Dormling et al. 1968; Heide 1974a; Bjørnseth 1977). SD treatment could therefore be used to control the height/diameter ratio to achieve more sturdy seedlings (Thompson 1985). This has especially been the case in years with a particularly warm and early spring, when growth starts early in the nursery and seedlings could become too tall and obtain an unbalanced shoot:root ratio (Ministry of Agriculture 1996).

As pointed out by Colombo (2001), the day length during the treatment is important for maintaining prolonged radial growth throughout the SD treatment. Also nutrient supply and the temperature following SD treatment have been shown to influence seedling diameter (Bjørnseth 1977; Fløistad and Granhus 2010), in both cases sub-optimal conditions were associated with reduced diameter growth. In an experiment comparing both timing and duration of SD treatment, Konttinen et al. (2003) observed reduced diameter growth when seedlings were SD treated during four weeks and with an early start of the SD treatment, compared with seedlings treated three weeks or less and with a later start of the treatment. In contrast, Kohmann and Johnsen (2007) reported similar or increased radial growth following SD treatment lasting for one, two or three weeks, compared with no SD treatment.

If sturdier seedlings could be achieved by appropriate manipulation of the growing conditions in nurseries, a precondition for practical application is that bud flush in late summer is avoided. A second bud flush makes seedlings more prone to frost episodes following autumn planting has been associated with a greater risk of infection by grey mould (Botrytis cinerea Pers.:Fr.) and other fungi during winter storage in the nursery (Sandvik 1976; Petäistö 2006). Appropriate timing and duration of the SD treatment is therefore essential to prevent bud flush in late summer (Hawkins et al. 1996; Kohmann and Johnsen 2007; Luoranen et al. 2009). Eastham (1992) observed second bud flush following one week SD treatment in the period late June to mid-July even if one week SD treatment may be sufficient to induce growth cessation. There was a reduction in frequencies of bud flush when the SD treatment was applied later (Eastham 1992). Luoranen et al. (2009) proposed a relationship between temperature sum and the risk of a second bud flush. They found reduced risk of bud flush when the temperature sum was high before the treatment and that low temperature following the SD treatment also reduced the risk of second bud flush.

To produce sturdier seedlings with increased diameter following SD treatment, it would be of considerable value for practical seedling production to determine if there is a narrow window where increased diameter growth is possible within the frame of today’s routines in nurseries, without compromising other seedling quality traits.

Picea abies seeds, originating in Buskerud County, southeastern Norway (60°N, 10°E, altitude 0–150 m a.s.l.), were sown on 22 May 2002 in limed peat mixed with 25% perlite, in multipot containers (75 cm3 pots, 500 seedlings m–2, 60 pots per container). Germination and the first-year growth phase took place in the greenhouse of a commercial forest nursery in Hokksund (59°46´N, 9°53´E), Buskerud County. Prior to the experiment, on 22 April 2003, seedlings were brought to the daylight phytotron at Ås, Akershus County (59°40´N, 10°51´E) for dormancy release and growing in a controlled environment. Seedlings were grown under natural light conditions and the temperature was gradually increased according to a schedule that simulated the normal spring temperature from daytime/nighttime (DT/NT) 10/6 °C to DT/NT 18/12 °C during 8 weeks of growth. Then, from 20 June onwards, the temperatures were kept at DT/NT 22/18 °C (12 h day and 12 h night gave a daily mean temperature of 20 °C). 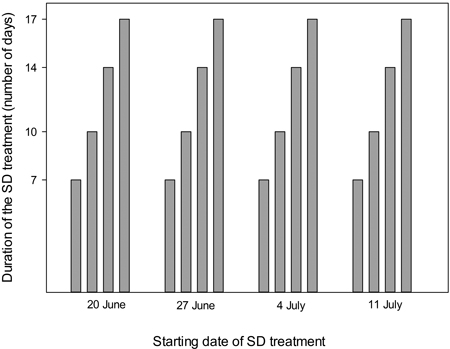 Fig. 1. Time schedule of the experimental short day treatments, with starting dates and durations as indicated.

From 4 August and onwards all seedlings were observed twice a week for registration of second bud flush. Upon termination of the experiment, dry weight was determined on 10 seedlings per replicate for seedlings SD treated for 10 and 17 days.

Dry weight was determined separately for roots and above-ground shoots including the stem after oven drying at 65 °C for 48 h.

Analyses of variance were performed using the GLM procedure in SAS (SAS Institute 1989) according to the model:

Separate analyses of treatment duration were performed to allow a comparison that included the non-treated control. The statistical significance of difference between individual treatments was assessed by the Bonferroni method (SAS Institute 1989).

Seedlings without SD treatment had significantly more height growth than seedlings given SD treatment (p = 0.0008 for 7 days and p = 0.0001 for 10–17 days of treatment) (Fig. 3). When comparing the seedlings’ height within starting dates of the SD treatment, no significant differences appeared for different durations of SD treatment (Fig. 2A). 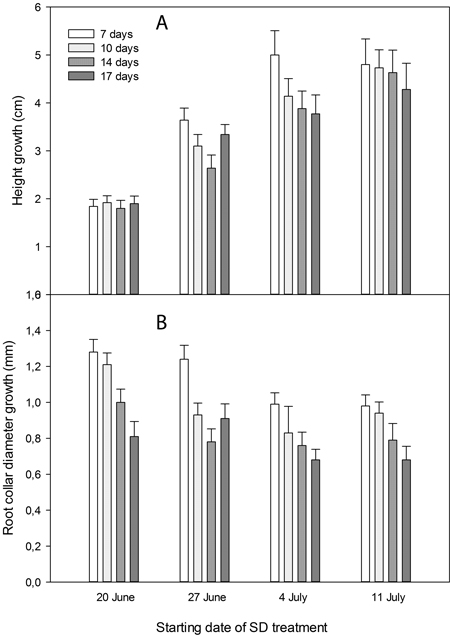 Fig. 2. Height (A) and root collar diameter (B) growth from start of the experimental treatments on 20 June until termination of the experiment on 1 September in Picea abies seedlings exposed to SD treatment with different starting dates and durations as indicated. 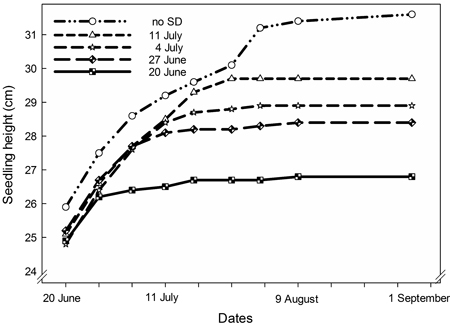 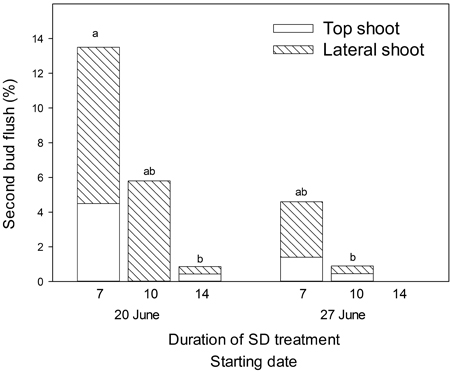 SD treatment is used in forest nurseries to stop height growth and thereby induce growth cessation (Dormling et al. 1968; Colombo et al. 2001). Seedling morphology also influences the quality of seedlings and their performance after planting (Thompson 1985; Mattsson 1997). Sturdy seedlings are especially needed on sites prone to attack by pine weevils (Hylobius spp.). Therefore, we wanted to explore the possibility to influence the diameter growth of seedlings following SD treatment. Based on previous research, we expected root collar diameter to have a slower reaction to SD treatment than height growth (Dormling et al. 1968; Heide 1974a; Bjørnseth 1977). We therefore hypothesized that it should be possible to utilize SD treatment to stop height growth, while at the same time maintaining diameter growth sufficiently long to improve the sturdiness of the seedlings (Kohmann and Johnsen 2007).

Seedlings without SD treatment achieved the largest average root collar diameter in our experiment. A similar result was obtained by Konttinen et al. (2007), but our findings are in contrast to Kohmann and Johnsen (2007), who found similar or smaller root collar diameter in untreated compared to SD treated seedlings. The contradictory results could possibly be explained by a smaller root volume and higher density (Von Wuhlisch and Muhs 1987) of the relatively taller seedlings in the outdoor nursery experiment by Kohmann and Johnsen (2007), compared to our seedlings. Another possible explanation may be more favourable light and fertilization conditions in the present experiment (Bjørnseth 1977).

This study also confirmed the rapid and uniform height growth cessation in P. abies following SD treatment as documented previously (Dormling et al. 1968; Heide 1974a). Earlier start of SD treatment resulted in shorter seedlings in our experiment. This illustrates how SD treatment may be used to stop height growth in the nursery.

When a second bud flush appear in seedlings in late summer, they will be prone both to frost damage and fungus infection (Sandvik 1976; Petäistö 2006). This study showed a clear relationship between timing of the SD treatment and frequencies of second bud flush. Only when the SD treatment started in June did second bud flush occur. This is in accordance with earlier findings (Eastham 1992; Kohmann and Johnsen 2007; Fløistad and Granhus 2010). We have previously reported on easier flushing of lateral buds compared to apical buds (Fløistad and Granhus 2010). This reaction is possibly due to a more shallow level of dormancy in lateral buds (Junttila et al. 2003).

The gradually declining daylengths after summer solstice provide a logical explanation for the lower frequencies of second bud flush following late SD treatment. However, a temperature-driven response, as proposed by Luoranen et al. (2009), could also be important and possibly interact with the photoperiod. By analysing results from three subsequent years they proposed that the risk of reflushing increased if the temperature sum at the start and at the end of the SD treatment was below or above a certain level, respectively. This may also explain the different level of reflushing in our experiment compared with Kohmann and Johnsen (2007), both performed with identical seed lots.

In addition to timing of the SD treatment, the duration is important to avoid a second bud flush, especially when combined with an early start of the SD treatment (Eastham 1992; Koh­mann and Johnsen 2007; Luoranen et al. 2009). In our experiment no or only limited bud flush occurred following 17 and 14 days of SD treatment, respectively. Practical implications could be recommendations of longer duration of the SD treatment if the treatment starts early, although our findings imply that this will be at the expense of sustained diameter growth. Based on the findings of Luoranen et al. (2009), considering the risk of second bud flush may be even more important if the temperature sum before start of the treatment is low, or if the temperature sum after the SD treatment is high, e.g. when seedlings are planted late in the summer or early in the autumn.

An important issue not addressed here is the possibility of earlier spring bud break in SD treated seedlings, which could be detrimental following early planting on frost prone sites (Heide 1974b; Bigras and D’Aoust 1992; Fløistad and Granhus 2010). Conflicting results exists, however, on how different timing of the SD treatment influence bud break (Konttinen et al. 2003; Rostad et al. 2006; Fløistad and Granhus 2010). This should be further studied to obtain sufficient information for guiding nurseries on SD routines.

The support for this study by the Research Council of Norway through projects no 153738/140 is gratefully acknowledged. We also thank Marit Helgheim for excellent technical assistance and two anonymous reviewers for constructive comments. The Norwegian Institute for Agricultural and Environmental Research, the Norwegian Forest and Landscape Institute and the Norwegian foundations “Skogbrukets Utviklingsfond” and “Skogtiltaksfondet” are also acknowledged for their support.

Dormling I., Gustafsson Å., Von Wettstein D. (1968). The experimental control of the life cycle in Picea abies (L.) Karst. I. Some basic experiments on the vegetative cycle. Silvae Genetica 17: 44–64.