Lodgepole pine (Pinus contorta var. latifolia Engelm.) has been extensively introduced in Scandinavia on less productive sites. Under a changing climate, it also has a high potential in the eastern Baltic region; still, its performance there has scarcely been reported. This study investigated the performance of 36 Canadian provenances in 14 trials in western Latvia. Tree dimensions showed notable provenance and provenance-by-environment variation, implying that local selection by provenance can be applied for improved yield. Southern provenances showed the best height growth, while southwestern (more oceanic) provenances excelled in diameter growth. Most of the quality traits were affected by provenance or provenance-by-environment interaction, yet the variation was lower than for the growth traits.

Introductions of exotic tree species have been made to maximise yields and the sustainability of stands (Savill 1997). The resistance of species to weather extremes, which are projected to intensify (IPCC 2013), has been identified as a major issue (Schlyter et al. 2006). In Northern Europe, particularly Fennoscandia, lodgepole pine (Pinus contorta var. latifolia Engelm.) is among the few systematically introduced species aiming for improvement of yields, especially in less productive sites, thus meeting the increasing demand for timber (Lindgren 1993; Elfving et al. 2001). The species has been productive, especially at a young age, mostly exceeding local Scots pine (Pinus sylvestris L.) (Larsen and Nielsen 1982; Stephan 1982; Elfving et al. 2001; Kuznetsova et al. 2009), thus aiding for the reduction of rotation period (Elfving et al. 2001), while maintaining comparable wood properties (Sable et al. 2012). At present in Scandinavia, application of lodgepole pine in commercial forestry has been paused due to concerns about potential biotic risks (Despain 2001); still, considering the growing demand for timber, wider use of the species might be resumed (Nilsson et al. 2011).

In the Baltic States, growth trials of lodgepole pine provenances were established during 1970–1990, yet few results of these trials have been published (Kuznetsova et al. 2009; Jansons et al. 2013b). Considering long-term decisions in forestry, such results are necessary for wider commercial application of the species. The regional specifics in tree growth (Lindner et al. 2010) also imply that local data are essential. The aim of this study was to quantify the variance in the growth and quality traits of lodgepole pine in Latvia for assessment of their potential improvement by selection among provenances.

The trials were measured at the age of 10–29 years; many of them multiple times. Height (H), stem diameter at breast height (DBH), and diameter of the thickest branch up to 2 m height were measured on each on each tree. The presence of spike knots and animal damage were recorded as binary variables. Stem straightness was evaluated according to three grades (straight, slightly curved, and curved).

The measurements of DBH and H were scaled (z-scores) by trial to account for the heterogeneity of variance across the trials due to different measurement age (Table 1). Trees with broken tops and leaning stems were excluded from the analysis (2.8% of observations). Random effects models were used to estimate variance components of provenance and provenance × trial interaction of the studied traits. The restricted maximum likelihood approach was used. Analyses were done on tree-level observations. The statistical model in general form was:

The relationships between latitude, longitude, and altitude of origin (of provenance) and the traits showing a significant provenance variance component were assessed using quadratic two-factor linear regression analysis. The statistical model was:

The overall 29-year survival of the lodgepole pine was ca. 40%. The overall mean (±confidence interval) H and DBH ranged from 1.36 ± 0.01 to 11.43 ± 0.14 m and from 1.36 ± 0.02 to 12.31 ± 0.25 cm at the age 7 and 29 years, respectively. The provenance and provenance-by-trial variance components of H and DBH were significant (p-value < 0.05) and had a similar magnitude (Table 2), indicating local specifics in the responses of provenances to environment. The probability of wildlife damage showed significant variance by provenance, while the probability of spike knots and survival showed significant interaction variance; yet, the magnitude of the variances were lower than for H and DBH. The provenances had generally similar influence on the interaction, although contribution of Summit Lake was slightly (ca. 5%) higher compared to others, in the case of DBH and H. The among-trial variation was strong for all binomial traits. Stem straightness and branch diameter showed only replication-related variance.

The latitude and altitude of the origin of provenance were the best predictors of H (R2 = 0.53), while DBH was best described by latitude and longitude (R2 = 0.46; Fig. 1). The probability of spike knots and wildlife damage were less related to the coordinates of origin (R2 < 0.15). The response surface estimated the best H for provenances from the lower latitudes and intermediate altitudes (50°53´N and 800–1200 m a.s.l., e.g. Fly Hilla, Lac La Hache, and Lacobie Creek), with a distinct decrease under an increasing latitude and altitude (e.g. Dease Lake and Cassior). 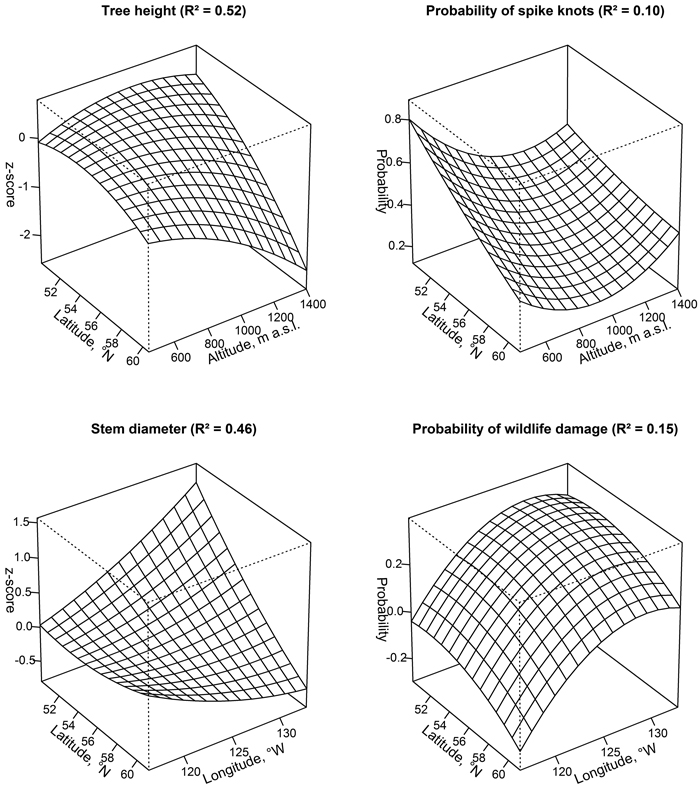 Fig. 1. Predicted tree height, stem diameter at breast height, probability of spike knots, and ungulate damage of the studied lodgepole pine provenances in Latvia according to their origin (longitude, latitude, and altitude). Note that the Y axis differs among the panels.

The largest DBH was associated (Fig. 1) with provenances from low latitudes and high longitudes (50°54´N and >125°W, e.g. Smithers and Babine Lake). Still, the best growing (DBH) provenances were Lacobie Creek, Halfway River, and Fly Hilla (their mean z-score ranging 0.31–0.45, respectively). The probability of spike knots showed the tendency to increase with decreasing latitude, particularly for the lower and higher altitudes. The probability of wildlife damage showed stationary maxima for provenances from mid-latitudes and longitudes, such as Beaton River and Dease Lake, while the Nordegg and Fort Nelson provenances were the less damaged. The most productive Fly Hilla provenance had an intermediate probability of wildlife damage and spike knots (0.15 and 0.37, respectively).

The dimensions of lodgepole pine were related to the geographic location of origin of provenances (Fig. 1), as observed in other studies (Rehfeldt 1987; Lindgren 1993; Elfving et al. 2001; Wu and Ying 2004). Tree height, which is a proxy for productivity (Savill 1997), was superior for the southern provenances from mid-altitudes (Fig. 1), as observed in Germany and Denmark (Larsen and Nielsen 1982; Stephan 1982). Such a response might be explained by an optimum climatic transfer distance comparable to ca. 1–2° degrees of latitude (Rehfeldt 1987), allowing trees to benefit from an altered temperature regime (Jansons et al. 2013a).

The provenance variation in DBH was mainly related to longitude (Fig. 1). This could be explained by the continentality of the origin of provenance. Accordingly, the best performance is expected for trees from the southwestern parts of the distribution, where the climate was milder. This exceeded the considered optimum transfer distance (Rehfeldt 1987), probably due to differences in elevation, indicating the plasticity of secondary growth. However, the predictions of the model (Fig. 1) did not meet any actual provenance (Table 1), suggesting that the effect of latitude and longitude were independent. This might be due to specifics of climate in Northern America as determined by relief and air circulation (Little 1979). The relationship between coordinates of origin and the probability of spike knots and wildlife damage were weaker (Fig. 1), likely due to specialization to local rather than regional conditions (Wu and Ying 2004). Still, the probability of spike knots and wildlife damage was higher for the provenances from lower latitudes, suggesting correlation with productivity (Fig. 1). Alternatively, spike knots might indicate maladaptation to climate (Wu and Ying 2004). Considering that the studied provenances only partially covered the native range of lodgepole pine (Little 1997), the predictions might be slightly biased, and the effect of altitude less pronounced compared to the studies of Rehfeldt (1987) and Ying (1991). Considering optimum transfer distances (Rehfeldt 1987), the results might be extrapolated to the neighbouring Estonia and Lithuania.